We get asked often about why we choose DCL over other cruises. If you’ve read our previous article on the price difference, you can see why people will question the value of a Disney Cruise.

Why we go is simple – “The Disney Difference”!

Last week while we were on the Disney Magic, I told Kelli that explaining to people what is “The Disney Difference” is really difficult. You need to see it to fully understand. I’ll try to explain it in a few stories from our past cruises.

First, let’s get the caveats out of the way. We have only been on two other cruises, both Carnival. And we loved them both-had a blast. We can’t speak to what happens onboard the other cruise lines. However, after our first cruise it was clear that DCL was where we wanted to go as a family.

Yes, a trip on DCL can be expensive. You can take a trip on Carnival for much, much less money. You’ll have a great time too! But there is a reason Disney charges a premium for their cruises. With only 4 ships and the number of cruisers going up, I won’t be surprised if Disney raises the prices more – and they’ll get it! Hopefully after reading this post you’ll see the value in a DCL vacation.

Have you ever been in the parks and seen a cast member make a “magical moment” for someone? Like when a child realizes they’ve lost a pin on their lanyard and a cast member rushes up and gives them a new one? Have you seen the video of Gaston being challenged by a young girl?

These are the moments that can make your stay at WDW extra special. Just being able to witness these events can add magic to your trip.

Experiences like these happen all day long on a Disney ship – to everyone!

The crew of a Disney ships believes in “The Disney Difference”. You hear them talk about it. More importantly you see them act on it. Their belief in “The Disney Difference” starts at the top! Natalie the Cruise Director always greeted us and stopped to see how our day was going.

On our first day of this past cruise, we were able to get on the ship earlier than most-we were in boarding group #4. We made a couple of stops to take care of some things and then headed up to Cabannas for lunch. We arrived before the rush of passengers hit the buffet. As we were enjoying a leisurely meal, the crowd started to build. People are rushing into the restaurant, kids in tow, carry-on luggage being dragged behind them. The crew is working furiously to serve food, pass out wipes, and pick up plates. During our few minutes watching, we saw several crew members stop working to take the plates of parents struggling to get food for their family while juggling bags and children. Not only did they take their plates, but they helped the family get to their table, got them drinks (something you are supposed to do on your own), and in some cases went to get more food for the family. That’s not a huge thing to do, but it makes a difference to that parent!

On our first ever cruise we were on the Carnival Holiday for our honeymoon. Neither of us had travelled much without parents at this point. On one excursion as the tour ended we found ourselves in downtown Ensenada miles from the ship. We found a sketchy taxi drive that took us on what seemed to be a car chase back to the ship. For the start of each excursion we were told where on land to meet someone for the tours.

Not so with a Disney cruise!

For every excursion booked through DCL, you meet your group on the ship and are escorted by a Disney crew member to your tour guide. At the end of each tour you are brought back to the boarding area of the ship. No hassle, no fuss! And no scary taxi rides!

Then there is the cruise activity staff. People like Danielle, Sara, DJ Matt! These folks are the heart of a Disney Cruise. If you participate in any of the ship actives you have the pleasure of working with this group. They are the camp counselors of the ship. In a 7 day cruise we danced, crafted, sung, celebrated, and cried with them.

Brooke and Danielle really hit it off on our last cruise. With just 1 meeting, Danielle remembered Brooke’s name and over the next day made sure to greet Brooke, by name, whenever our paths crossed. On the afternoon of our first at sea day, Brooke wanted to go the button making class. Danielle was one of the staff assigned to that activity. We ended up staying in that area for the next 3 activities with Danielle. That night at dinner, Danielle came and found our table to bring Brooke an arrangement of origami flowers she made during her break. During our afternoon with Danielle, a mother and daughter showed up to make buttons. They had the wrong time and were there over an hour after we finished. DJ Matt helped them find another craft session they were interested in. He then called the folks leading that session to let them know a group is coming. He made sure that the leaders would help them get up to speed since they had missed the first 20 minutes.

The cruise staff, like other crew, truly cares about the guest experience. They enjoy and live to create magical moments. B11 – The cruise staff has a special dance during Bingo for B11. Natalie the Cruise Director even jumped in on the dance!

One of our servers gave Kelli their drink menu card for her to pick out a special cocktail. At the bottom of the card had a few notes for the servers to remember. The notes reminded them they were part of a show and every role was vital for a good show. They believe in this and work hard to achieve the “good show”. 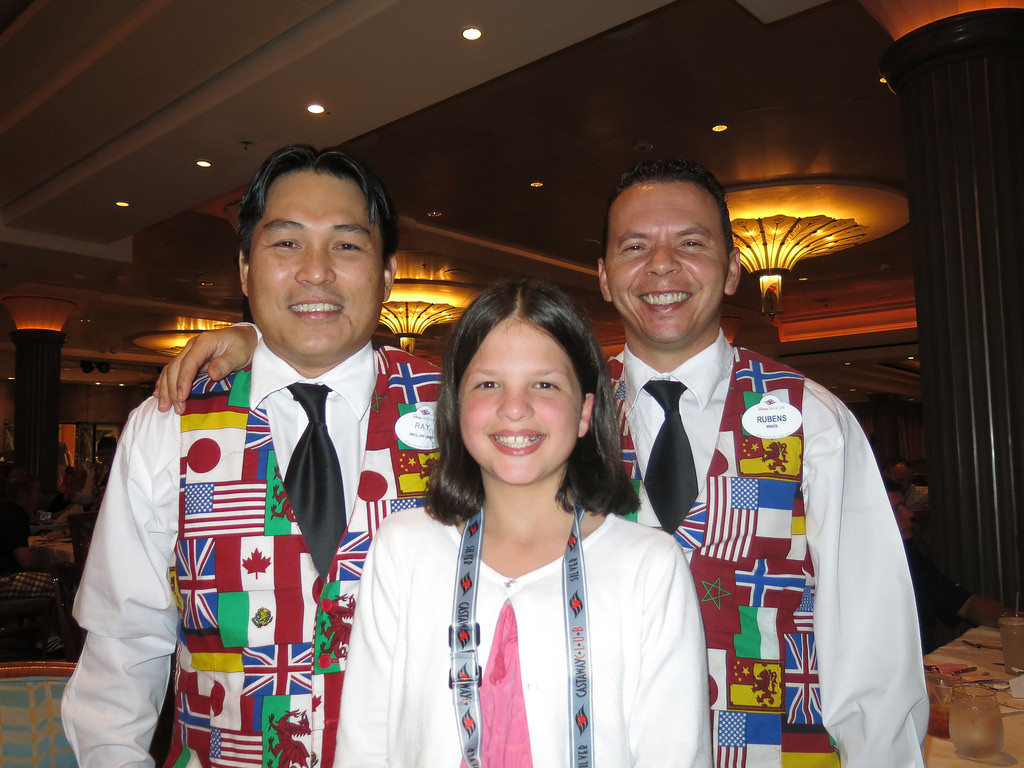 Our Servers – Ray and Ruebens

Also you are on a ship with like minded people.  Even though there are always lots of people without children, everyone is there to have good family fun.  No one is on board looking for the party barge!

We know that some trips on the Disney Cruise Line are more expensive than other cruise lines, but because of “The Disney Difference” DCL will always be our choice for family cruise vacations.